Much was in my favor before the 2015 Bull Run Run 50 miler. I had survived the two previous years, giving me confidence of not only a finish but a lot of fun. I had been eating better and making more vegetarian choices for several months, leading to the unintended loss of a few pounds and a greater sense of well-being. And I had recently returned from a week in Paris, an ideal spot for carbo-loading. Jet lag had me asleep by 9 p.m. and up at 6 every morning during the week before the run. Friday I had four meals, followed by a dose of pizza Friday night at Ray’s place, topping off the tank.

I hoped these factors would compensate for my having run fewer than 25 miles during the previous three months. I hadn’t run more than ten miles in one go since the Canary in the Cave 25K+ five months earlier.

My “alpine style” success at that event led me to retreat from the siege mentality I had previously brought to Bull Run. I started with my utility belt lightly loaded with three or four gels and a half-full bottle of Gatorade. I knew I could survive the early miles in the cool morning without extra fluid.

Most important, I had a strategy. I reviewed my recorded pace data from prior finishes and saw wild changes in speed from mile to mile. 2014 was smoother than 2013, but it was clear that if I could avoid the egregiously slow miles of 20+ minutes and keep closer to my 15-minute target, it would be a big help, even if it meant giving up my occasional fast miles under 15. 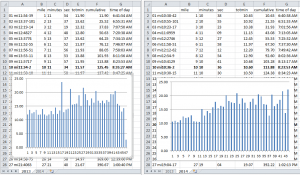 To achieve my steady pace goal, I determined to start slow, even more than I determined to start slow in 2014. I started among the back of the pack with Bruce, my teammate on the “Wheezing Geezers,” a gang of four we thought might have a chance of taking the slowest team prize, if not the most aged. (Our average age of 45 was barely over the average entrant age of 43.) I took it easy on the early miles, focused on chatting, walking the rises, and patiently waiting at the crowded stream crossings.

I came alongside Ken Swab, who I had greeted in the morning with Mark Zimmermann. Ken told me that Mark preferred a steady pace, while Ken followed the “fly and die” philosophy. That sounded like my usual style, to run when the legs had run in them, but I was trying to maintain discipline, often putting on the brakes during these early miles. (Ken’s report, Mark’s report)

Ken mentioned that he had studied his past data, and prepared a pace card with his target arrival times at various points of interest. I had done the same, but forgotten to bring the slip of paper along. I also forgot to tie my shoes — or rather I had intentionally tied them very sloppily to make sure I would tie them properly before the start. I paused to take care of this business, and also made frequent stops to relieve pressure from sipping Gatorade while not sweating. I told myself these slow miles would be so easy they wouldn’t count against me in the second half.

I spent a brief minute at the first aid station, continued on to the turnaround, and counted other runners to determine my position: 64 from the back, my slowest start by far. The plan was working, now it was time to get to work! 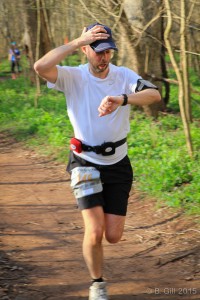 I caught up with veteran Frank Probst, and mentioned to him that our team had been DQ’d because of one no-show. Frank had earlier expressed surprise, or perhaps umbrage, that our team would dare to attempt to claim the “oldest team” designation. His team, Huffin and Puffins, would win easily with four finishers of average age 66.

I arrived at the start/finish aid station (mile 16) after three and a half hours, a pace of just over 13 minutes per mile. Close enough to 15. I considered dropping my belt, since the weather was perfect and I could maybe get by with just a bottle like the elite runners, but wanted to keep my pocket pharmacy of band-aids, Advil, salt tablets, and caffeine-laced gels. Maybe next year I will start without the belt and pick it up after 16.

After six hours I had covered the marathon distance, with an average pace a little over 14 minutes. This is a psychological halfway point, though it is a peculiar kind of pick-me-up to say “just another marathon now.” I knew it was much less than 26 more miles, but it was still too early to start counting down. I kept shooting for 15-minute miles, and was usually within a minute or two of my target. The White Loop was not as defeating as before, though very solitary. The archery range warning signs and the bangs and booms from nearby Fairfax Rod & Gun Club always provide incentive to move along.

By the time I reached the Do Loop after mile 30 I was still on my pace target and knew I would have a good finish if I could avoid mishaps. The weather was still fine, though warmer, and I didn’t mind the frequent ups and downs with the views over the water. It’s the last one-way section, and with no witnesses I dared to take my shirt off. It was a pleasant sensation and helped take my mind off the long climbs. Toward the end there was a group of three spectators watching what must be a fairly boring spectacle, and I made a show of channeling my annoyance at the constant elevation change by charging up a rise. I didn’t regret it as much as I expected to.

Decently attired again, I resumed the homeward stretch with just over a dozen miles to go. I knew the fastest runners were already finished, and I was happy to get more for my money by hanging out in the back of the pack. I covered a mile with a serious runner who claimed to hold an age-group record for the course, but had been slowed this year by surgery, maybe knee surgery (apparently just a few weeks earlier; a doctor had vetoed his plan to do a marathon the previous week).

I saw an impressive pair of calves ahead, but did not know it was Gary Knipling until I caught up and recognized his infectious smile and cheerful voice. We chatted a bit before I pressed ahead and joined another low-bib-number veteran. His modesty belied a considerable amount of experience running trails. He said he could not recall better weather for a BRR, and I later learned that he was tied with Frank for the record 23 finishes. He did not mention his celebrity status, but I noticed that volunteers would cheer and call his name as we approached an aid station. I snapped a quick photo of legendary Tom Green at the superhero-themed Wolf Run Shoals aid station. 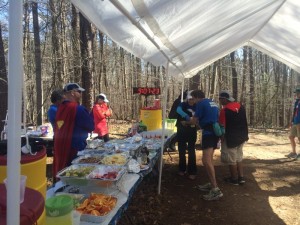 I finished in 11:36:01. By the nominal distance, my pace was under 14 minutes per mile, but Runkeeper shows a GPS-based pace right on target. 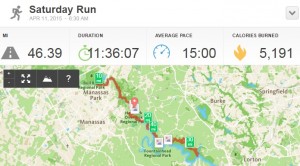 The organizers seem a little touchy about the distance: “We believe that our course is about 50 miles long. That is all current management of the event cares about.” But the course notes also point out that “Some of the hills on the course are gentle, a few are rather steep.” These elevation changes add distance, of course, as Science-based Running investigated.

I did my own experiment, and found that my iPhone 5 did not give me credit for climbing a 50-floor building, showing only 48 feet of climb. So there is definitely some unreported additional distance. When my Runkeeper record appeared, a friend commented: “Dude. For real? 46 miles?” I felt a little cheated too, but perhaps I saved by running the tangents. 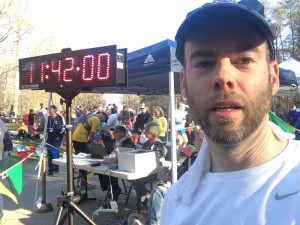