The New River, along with two other Appalachian rivers, is among the oldest in the world. It is also the site of one of my oldest memories. My grandparents lived in South Charleston, West Virginia, and I remember long drives along highways and hilly byways for Christmas and Easter visits. One year we visited the New River Gorge Bridge, perhaps around the time construction was completed in 1977. My father took a slide photo which ended up in my collection. 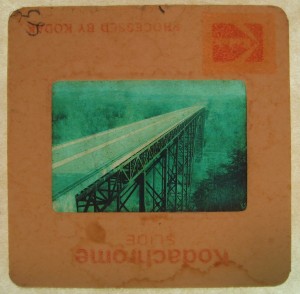 So when Ray suggested the Canary in the Cave “25K+” trail run, and I saw that the course would finish with a long riverside approach to the bridge, I had to jump in. Ray reserved space at the Morris Harvey House, the top floor of which we would share with Peter, the speediest of the colleagues Ray cajoled into coming. 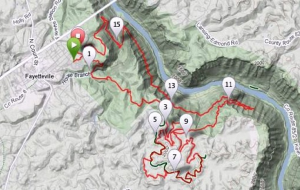 The forecast was for a sunny and cold day, and we woke to 23°F and a dusting of snow on the ground. After chilling in the starting area, I got off to a fast start to warm up, finishing the first mile in 9:19, but soon found myself walking in a single-file conga line. But as the field spread out, I fell into a rhythm of consistent ten- and eleven-minute miles.

Going in to the race, the scorecard showed a lopsided 4-8 record against Ray, and that was counting a half-second photo finish victory at an earlier 5K. I had yet to win at a distance greater than ten miles. Ray was making the usual noises about injuries and lack of training, and I saw this as a desperate chance to begin to correct the 2-to-1 ratio on the scoreboard.

Despite my speedy start, I knew Ray would not be far behind, and I may have spotted him over my shoulder. As a PSYOPS tactic, I sped through the first aid station, hoping to appear stronger than I felt, grabbing only a paper cup of water. There were (false) rumors of inadequacy at the aid stations, including a shortage of cups, and I held on to that paper cup for the whole race, just in case. I was running alpine style, carrying only my phone and layered clothes, with hat and gloves. The outer layer came off early, and the event photographer captured my black with green accent ensemble, a photonegative of a Pamplona bull runner. 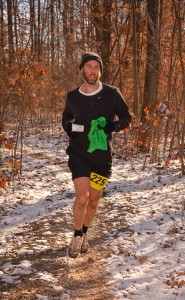 We continued along the ridge trails, struggling to pick steps through a layer of leaf debris and the snow. I kept to the middle of the path, trampled down by earlier runners, hoping to avoid invisible obstacles. Then, I fell.

Falling down must have been something my forebears got a lot of practice at, and the judges of fitness took notice. I don’t do it often, but I seem to be good at it. I don’t know how it started, but before I knew what was happening I had folded my knees to one side, rolled through on a thigh and hip, and splayed my arms ahead to sacrifice the more expendable joints on impact. I also heard myself emit a loud “puta madre” before landing, though I doubt it enhanced my survival chances. With an irrational concern for decorum, I bounced up right away, checking for witnesses while shaking the snow and leaf litter off, then continued on unharmed.

Ray appeared and said he had taken a tumble as well. He thought he was bruised, but the photographer captured evidence of a long thigh-scrape, a souvenir from the trail.

I got a compliment for bringing my own cup to Aid Station 2, but was too dull to come up with a better response than “Uh, it’s not heavy.” I took on some fluids, but it was still too cold to remove my hat so I wasn’t sweating much. I continued on, keeping up a fairly steady pace around 10-11 minutes. Then we started down the Craig Branch Trail, a gradual descent from the crest of the mountain. I had gotten ahead of Ray and was mostly unaccompanied through this section. It was a wide and flat road, stubbornly cut into the steep mountainside.

Trail runners speak of “runnable” terrain as wine drinkers use the term “drinkable” — something you might think goes without saying. This smooth road, padded with a layer of leaves, was like going down a slide. I knew Ray would be locomoting like a mofo through this section, so I pushed the pace, posting my fastest mile of 9:03 as I descended into the valley. Then there was a hairpin turn and we were finally heading back toward the finish, the New River to the right and the bridge a few miles ahead.

I was in a good zone and feeling strong, confident that I could make good time until the last two miles, where an arduous climb out of the valley was promised before the finish. I even paused to take a snapshot of an old mine entrance along the way. 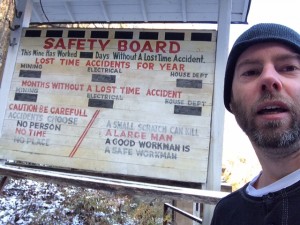 I hit another aid station, presented my paper cup, and made a prepared quip about my “official Dixie Cup of the Canary in the Cave.” It was warming up a bit and I took off my hat. As I approached the climb out of the valley, a race official told me there was ice up ahead, and I said “Awesome, thanks!” imagining filling my cup with ice cubes. I’m not sure why that sounded appealing, since I wasn’t planning to improvise an ice pack for one achey joint or another. But ice cubes would have been preferable to the stream crossing ahead, slick with ice-covered jagged rocks.

The last climb begain at mile 15.5, with 25 kilometers done this would be the “plus” in the 25K+ event name. I started hiking up, pausing again for a self-portrait with bridge. 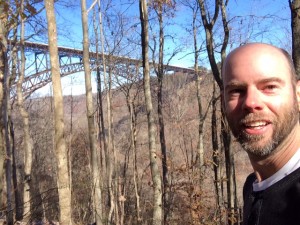 Before long I could hear my heart beating in my ears, and counted a 160 pulse, a tolerable level within my discomfort zone. It was about a mile and a half to gain 600 feet of elevation, costing me 17 minutes for my slowest mile. Coming out on top, I ran in a 3:22 finish and grabbed a quick shot with the RD wearing the gimme hat race premium, then jogged off to the parking lot. 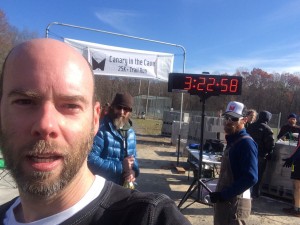 I found Peter sitting at a picnic table, looking pretty ragged — understandably so, after his finish in just over three hours. He gave me the car keys and I retrieved my jacket, then jogged back to the finish line to see Ray and the others come in. I had just enough time to pose with my prop, a briar pipe, when he came over the line. It took a while for anyone to get the joke, that the leaderboard uses an ASCII pipe symbol for each win. I recorded this score with a more suggestive mark.