Runkeeper supports the hypothesis that my run reports are related to miles run, as I have not reported since the BRR 50 in April. With two marathons on the schedule, at least one of which I plan to actually run, and that a mere three weeks away, I realized last weekend that it was panic time. My last outing was a ten-mile tourist jog along the Sea of Marmara, great fun but not great training.

So I declared to a few friends that I would cover twenty miles on Sunday, hoping that shame would do the job where common sense had failed.

While I did not expect that distance to be easy, I supposed I could somehow push through it with willpower. Which, in the end, is about all I could do, but the second half was much more a shambling mess than I envisioned, and completely outside the realm of the Oprah Line territory which I am considering a goal for the MCM. If I had added an 6.2 additional miles at my average pace, my marathon time would be 5:38. If, realistically, the last six were done at the same speed as the last six of my 20, my marathon time would be closer to 5:50. Perhaps even that is not realistic, because I was not being lazy during the last two miles and simply could not propel myself faster than a 15-minute pace.

My discipline was not very good, and I hope I can improve on that score. Several times I broke pace for no good reason. During the long boring stretch alongside Four Mile Run, I got passed for the first time. I kept the runner in reach by running on her head’s shadow while I tactically prepared for an overtaking maneuver by laying in some more of the Powerade I grabbed at the Arlington Exxon and squeezing in another gel. But then instead of a civil passing, I took advantage of a corner like it was some kind of Formula One race, then to “put some distance between us” and “destroy her will” I posted my fastest mile (9:11) since the first two. This strategy had the obvious result, as I was gassed after making the turn north by the airport. I resisted the urge to look back but thought it was likely she was pulling me in. When I did look back, I realized that my hypoxic brain had memorized a rather unhelpful feature to recognize a runner: yellow headphones. But eventually the yellow headphones pulled alongside and then on ahead, maintaining a steady pace. I kept her in sight and decided that if she stopped at the potties at Gravelly Point, I would take the chance to regain the lead. But she did not stop, she did not look to the left and she did not look to the right but kept on like she had cruise control. I started walking, at first to look for a water fountain and then because my will was broken.

That first long walk was finally ended by a goose. It was thinking about crossing the path in front of me and gave me an evil look as I approached. I glared back, and he opened his beak to prepare a hiss. I hissed first, and somehow channeled that aggression into resuming a run.

I brought my headphones along, correctly anticipating that running for hours on paved trails would be a bit tedious. This probably made it easier to walk, providing one more distraction from my goal. At some point I was passing time blabbing to myself in broken French, and it occurred to me that the word “courier” means “runner.” That seemed kind of cool and evocative and worth looking up.

A little later I had another breakdown of discipline. I was starting to get thirsty and planned to cross the pedestrian bridge to Roosevelt Island for the water fountains. When I saw the locked gates I was more than a little annoyed; I had not anticipated that the island would be shut down along with the federal government. I would have to detour to Gas & God to get some more fluids. While jogging along and entertaining such thoughts, I saw some dog-walkers on the path ahead. I moved to the left lane to pass them and resumed my beat-down, hunched-over posture. I looked up a bit later and realized that I wasn’t gaining on them. This was so infuriating that I burst into a flat sprint, which continued as I climbed the roundabout ramp bridge over GW Parkway. I was breathing pretty rough when I got up to Lynn Street, and the “Pacers Oasis” set up there was about a welcome a sight as I could imagine. I assumed they were set up for an event, but they called me over and said the water, sports drinks and snacks were there for everyone. I drank about a quart on the spot and topped off for the way home, glad of an excuse to linger through another streetlight change. They didn’t have a tip box out, so I had to express my gratitude on Twitter.

I started with two Clif bars and four gels, one with caffeine. I took that one and two Advil at the oasis, but didn’t sense any obvious effect. By mile 16 or 17 it was obvious that poor conditioning and not discipline was keeping me down. No amount of cursing or promises of self-bribery could get me into a decent pace zone.

As I waited at the last road crossing a guy came up on a bicycle and said “hola amigo.” He was all sweaty and told me it was 90 degrees out, maybe 100. I was ready to believe the 90. (It was actually 70 in the morning and 79 when I got home.) We both complained a bit, then he told me he was from Honduras, where it was “tres veces más caliente.” Maybe I should run a marathon there, so at least I will have a good excuse.

While the Condor was splitting a weekend marathon over two days and mixed terrain, I found myself in the Land of 10,000 Lakes without running shoes. After the unexpected discovery that Minneapolis has more to offer than the Mall of America, we decided to stay through Sunday, so I started looking for a local route to accommodate my once-a-week running regimen.

Long Meadow Lake was the one nearest our lodgings, so I scouted it while walking to the hotel pool. There was an entirely suitable crushed gravel path parallel to the water’s edge, leading into a tantalizing verdant tunnel. This sight was powerfully inviting.

I decided I wasn’t leaving the state without a proper run. I experimented with a few strides in my flip flops, but they were far too annoying and floppy to be of use. Back at the hotel I looked hard at my leather street shoes: they would do in a pinch. But on a later visit to the mall, I spotted a pair of New Balance Minimus in my size and grabbed them without even trying them on. That night I found it was hopeless. Stuffing my feet into socks and the extremely snug shoes left me too uncomfortable to even walk around.

The mall wouldn’t open until late on the morning of our return travel day, so I was back to the dress shoes. Then I thought to try the shoes on without socks. Not bad. They were still very snug in the heel and midfoot, but roomier in the toes.

I started plotting a route. A body of water seems to demand a circumnavigation of some kind, and I saw a bridge in the satellite view that I could use to cut across and loop around the northern half of the lake. Strangely, I could not map a route across the bridge, but got a rough estimate of the distance by requesting walking directions from one end of the crossing to the other. 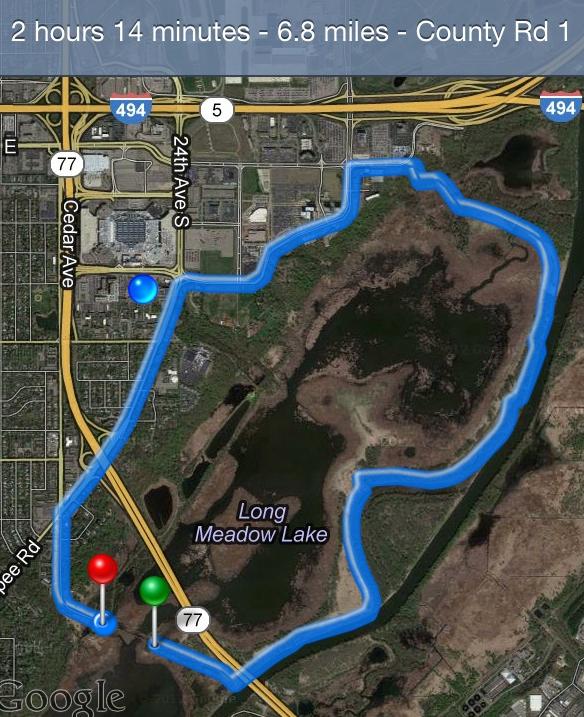 This would be my first outing in any kind of minimal shoe, and I wasn’t sure of what to expect from the trails or my feet, but I was looking forward to trying both. I got up in the morning a bit later than planned, dressed for an overcast 60° day, and slipped out past the breakfast buffet, carrying only my phone, a credit card and the room key.

The shoes were amazing, completely comfortable even across the parking lot. I have never been able to maintain anything other than a heel-strike for more than a few strides; it just felt too awkward. But with these shoes landing on the ball of my foot felt natural, like I wasn’t adjusting my form at all. Perhaps all I needed was the minimal 4mm drop from heel to toe in the Vibram sole.

It wasn’t long before I got my first reaction to the aggressively-styled shoe. On the access road, I stopped to photograph a trail map and then met a local resident.

The snapper did not seem too impressed by my footwear, perhaps even threatened. But both animal and shoe were out of their natural element on this asphalt. A little farther on and I joined the Hogback Ridge Trail, feeling utterly light on my feet. I glided nearly silently along the lakeside, spotting dozens of red-winged blackbirds, geese, goldfinches, and the ever-present great blue heron.

Up ahead I took a fork in the trail leading to the bridge crossing. This turned out to be a mistake, taking me to a long highway bridge with unwelcoming hard shoulders. I considered running across but thought better of it. I decided to continue on a bit then turn around for a somewhat disappointing out-and-back route. 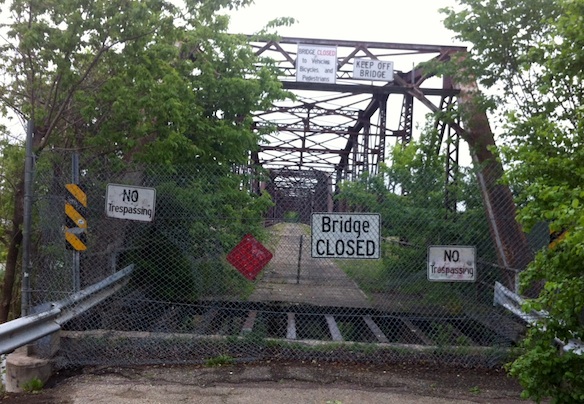 Again I considered turning back, but something told me this was going to be the best part of the outing. The day before, a four-year-old had shamed me at an amusement park attraction. Sure, he cried once, getting stuck on a particularly tight spot, but I was sweating and gritting my teeth constantly once we reached the second level. I wanted to cross the cables and wobbly plank bridges unaided, with the same casual disregard he showed for the dizzying, multi-story drops below our feet, but it was impossible. I squeezed his hand in my sweaty palm and clung desperately to the safety rope. I imagined taking a photo looking down between my feet, balanced on bouncy two-by-four-topped parallel beams, to the concrete floor far below. The attendants had caught me trying to sneak my phone along and made me leave it in the locker, but I could never have managed to take a picture anyway. Just as well, since I will never forget that view. So I was prepared to disregard warning signs, squeeze past obstacles, and tiptoe over rusty girders poised over muddy swamp.

Once across the bridge, I was committed to completing the loop and started to make good time, hoping to get in before breakfast closed. I stopped to admire some more turtles, which were busy digging in the sandy soil and showing annoyance at my presence. A walking couple suggested that they were laying eggs.

The trip record would show that I covered almost eight miles. Other than some tightness in one calf, I felt great during the run, but it turned out to be far too much for a first experience in a minimal shoe. My feet were fine, but my calves were knotted and sore for days. By Tuesday I was reduced to about the speed of those turtles, but looking forward to the next time I’ll squeeze into those shoes and hit the trail.