The forecast was fine for the 25th running of the Bull Run Run 50 miler. 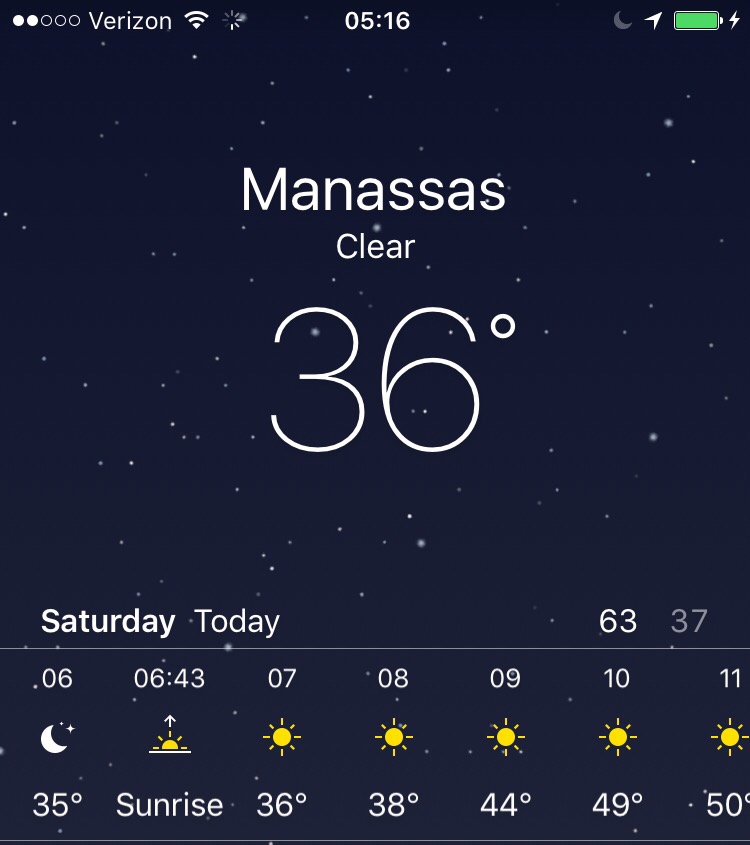 A bit cool at the start, and a bit warm by afternoon, but sunny and dry throughout. Earlier rainstorms had already left their mark on the course.

My training was typically inadequate, a few 5-10K runs around town, and nothing serious since the Barkley Fall Classic in September. I also got my heart rate elevated watching results trickle in from the real Barkley the previous weekend.

Inspired by seeing what serious training can accomplish, I set out to optimize my intentions, preparing a race card that would guide me to a glorious finish in 11 hours. Rather than shooting for steady 15-minute miles over a course that is anything but consistent, I set goals for each leg of the course based on my fastest completion of that leg in my three previous finishes. 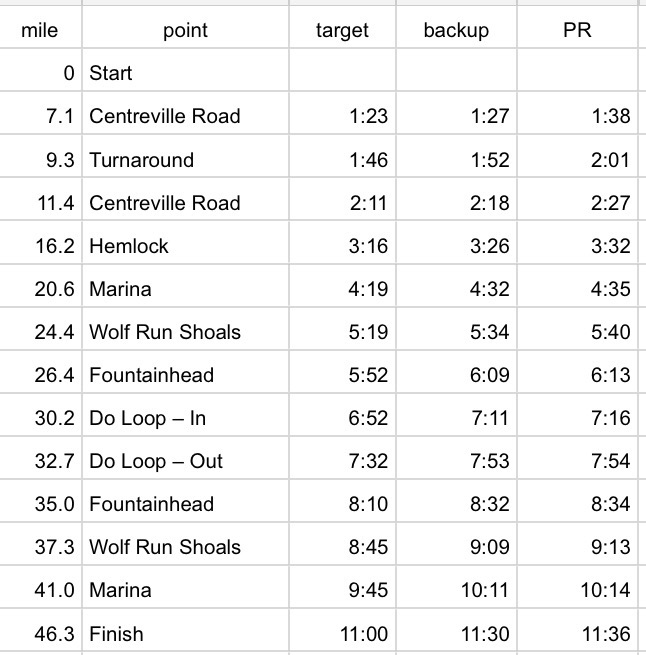 These plans would be dashed at the start, when it was announced that we would be running the “high water” course to avoid the muddiest bogs at the northern end, with an additional passage through the White Loop added near the end to maintain distance. 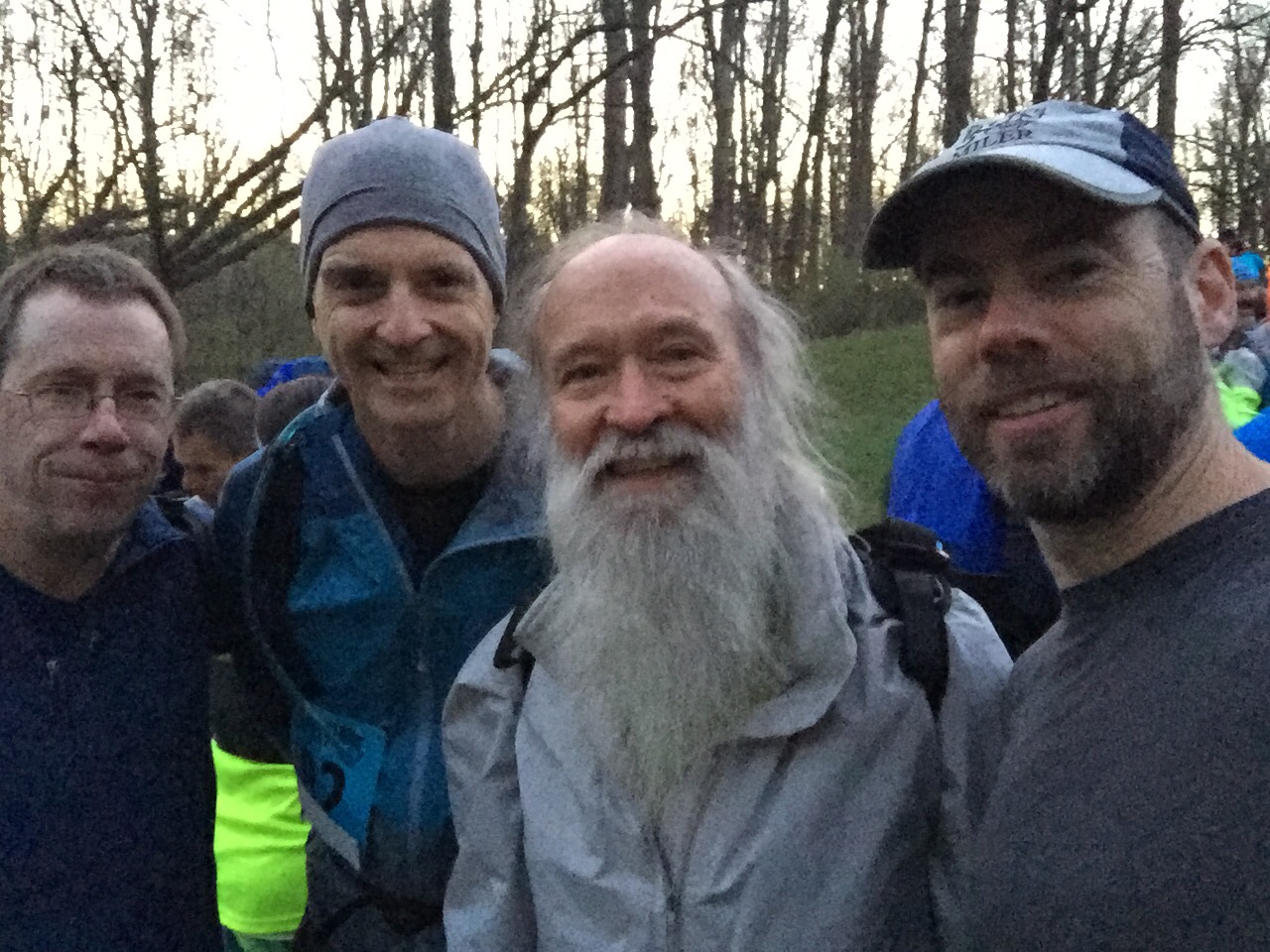 Our team, Complex Roots of Unity, stood for a portrait and then we were off. I carried only a bottle on the way north and almost didn’t need it in the cool morning air. I planned to save time by buzzing through aid stations, and was pleased to see that I spent only 44 seconds at the Centreville Road stop. I Kobayashi’d a banana half and carried a cup of sports drink out. On the return visit I limited my stop to half a minute.

The first thought of quitting came at 12 miles. Not quite a desire to quit, but a strong urge to start walking despite the flat, comfortable terrain. Beautiful, even. The sun was peeking through the trees in the east, highlighting the exhalations of the runners ahead and illuminating the blooming bluebells, of which there was a rich crop this year. 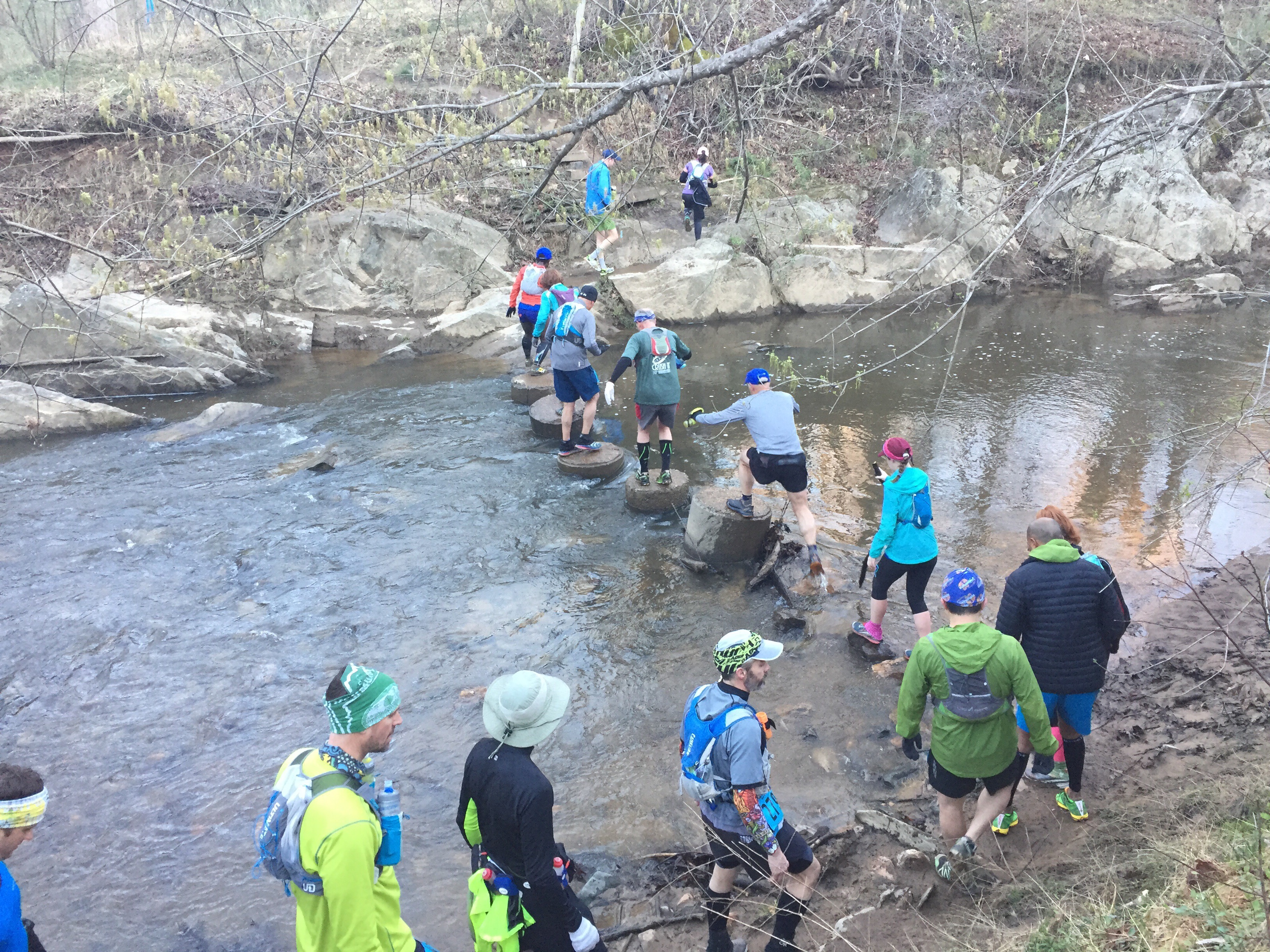 The earlier rains left some of the crossings tricky, and I struggled to keep my feet mostly dry with careful stepping, but my shoes were pretty muddy and soggy by the time I got to my drop bag at the start/finish area at Hemlock. I was very happy to change into dry socks and clean shoes, and strapped on my belt. Sunblock and some snacking made this my longest stop, six minutes in total. I would spend under 15 minutes stopped all day, including one half-minute pee.

At the southern extreme, the Do Loop no longer seems as grueling as it did the first time. I heard a familiar voice and looked back to see Ray just behind, with two other runners. This put the pressure on to secure another pipe.

At 3:00 pm I saw the “10.0 miles to Hemlock” sign. If accurate, it would mean I could hit my aggressive goal of 11 hours by keeping a 15-minute mile pace. But was it ten miles, or did the high water course add more? I could only manage a pace of 16 or 17 minutes now anyway. The descents were very hard on the knees, and I actually appreciated the climbs as a legitimate reason to slow down. 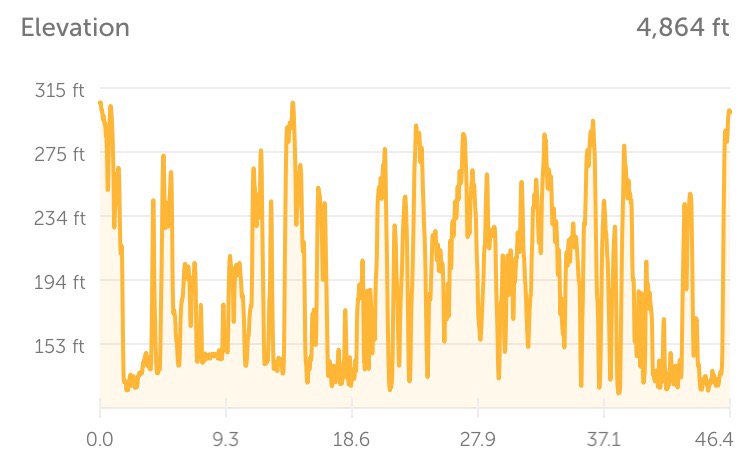 I continued to express through the aid stations, sometimes basically walking through, though I did pause to let Alex P. dump ice water down the back of my shirt. It was as invigorating as an electrical socket, and he was pleased at my promise to give five stars to the Wolf Run Shoals aid station on Yelp.

I wondered if not resting might be slowing me down. One group passed me four times, always after a stop. But it seemed incorrect in principle to be at rest before the job was done.

Nearing the finish, I was mostly alone, plodding and plotting. Hitting 11 hours was out of reach, but 11.5 might be possible, a slight gain over my personal record, which I remembered as 11:34. But I couldn’t make the math work for a PR without knowing the course length; some people said it was longer than before, some shorter. I was at sea, just like the first time, simply shooting for 4mph. On average, I hit that target. 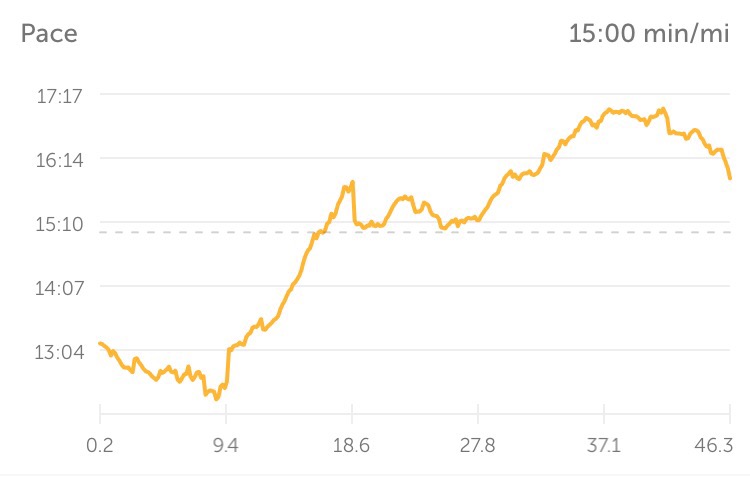 I slowed through an expanse of bluebells. With fatigue-heightened senses, the rolling green carpets dotted with blue-violet were entrancing. A gorgeous yet flimsy-looking butterfly fluttered past like a leaf in the wind. Such creatures cross continents? Some bees buzzed around as well, and the thought of their stingers prodded me back into a shambling run.

I thought of the many champions I had seen earlier, super humans with low bib numbers. Knowledge of the off-course hardships some of them had overcome left me staggered, stricken by their gutsy determination.

Finally came through at 11:36:24, which turned out to be less than thirty seconds slower than my previous best. Oh well! I stood by the finish line to cheer in a few more back-of-pack runners. 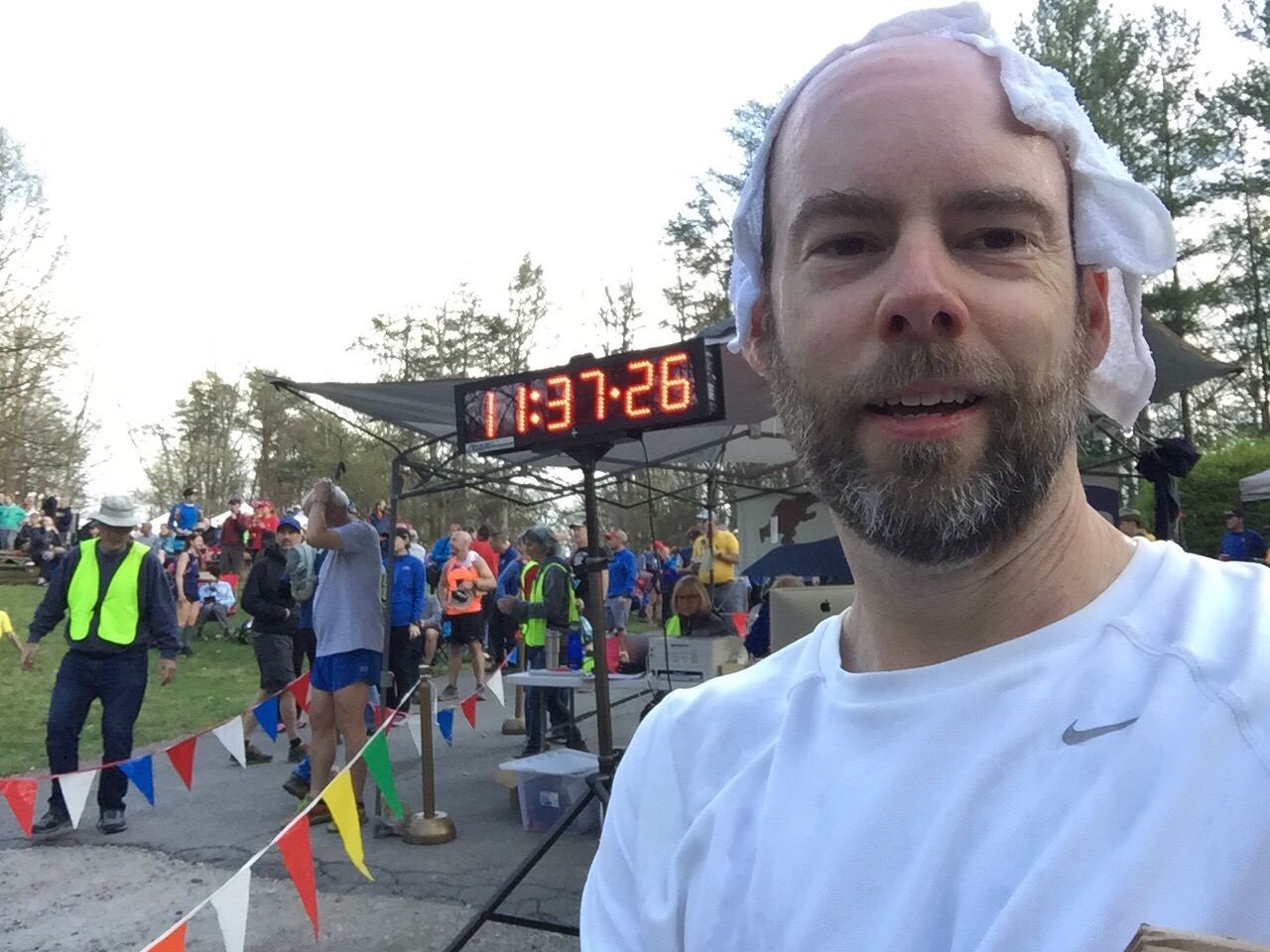 Last and greatest of all was Frank, bib #1, who finished the 25th Bull Run Run with under two minutes to spare before the 13-hour cutoff. He has finished all 25 races starting in 1993, completing the first one at age 50.

Our team would win the category of slowest finish!

I ingested only one gel all day. I carried three, and thought about taking another with caffeine, but took a 200 mg tablet instead. I popped one electrolyte S-Cap at the beginning of each hour from 10 to 4 and had no issues with cramps. Took about three Advil. It was very pleasant to get by on normal food and Gatorade, though I did not indulge much in the 5-star BRR buffets (saw stuffed grape leaves again).

Compression shorts under bathing suit worked fine, with iPhone in one pocket and a supply of oft-used tissues in the other (though I was chastened by another runner for my dainty and dignified “snot rags”). Vaseline in the unmentionable zone was beneficial but should have been more broadly applied. Body glide around waist and sunblock perhaps mostly psychologically useful. Nathan Triangle belt for bottle and meds and gels. Carried a phone charger but thanks to Low Power Mode and limited use (Runkeeper counting off miles in background and a few photos) arrived at the finish with 30% charge.
BRR 2013
BRR 2014
BRR 2015

5 thoughts on “Complex Roots of Unity”