Eating is a nuisance.

Sure, like certain other behaviors necessary to propagate the species, ingestion can be a pleasure, perhaps even elevated into an art form. But many of my meals are refueling stops, and even when the eating is fun, the prep work and cleanup is a drag.

All the more while running. Anyone preparing for a marathon learns that nutrition during the event is as important as pacing to make it to the finish. Runners experiment with fortified sports drinks, gels, candy and other high-calorie energy inputs. But carrying more stuff, fussing with opening packages and disposing of wrappers can be unexpectedly trying after twenty miles.

Race foods typically contain a lot of sugar. But if you research running and sugar, you mostly find the fashionable demonizing of “added” sugars responsible for so many ills, with advice that runners try a nice avocado instead.

If our bodies break down foods, especially carbohydrates, into simple sugars which provide energy to the muscles, why not run with the tank filled up with pure fuel? I decided to experiment with table sugar as food while running.

Before breaking a sweat, I hunted for a scientific-looking article.

Sucrose and glucose are both simple sugars; however, sucrose (also known as table sugar) is made up of one glucose and one fructose molecule linked together. Glucose is the body’s preferred energy source because it circulates throughout the blood and provides energy, while fructose is the type of sugar found naturally in fruit. Researchers found when the two different sugar sources were combined, it increased how quickly the gut was able to absorb and process the sugar. This means table sugar mixed in water is a prime candidate for fulfilling the fast-energy needs of endurance athletes.

Jackpot! A source with genuine footnotes gave my idea plausibility. I just had to figure out a dose and delivery system.

The idea was to take in just as much energy as I needed to offset the extra energy used by running, so my body would have to find some other excuse to slow down.

An online calculator estimated my basal metabolic rate at 1823 calories per day, just to stay alive and walk around. Since I would still have regular meals on a race day, I figured I could ignore this.

Estimates for energy used while running vary, around 100 calories per mile, depending on body weight.

There are 49 calories in one tablespoon of sugar, suggesting about two tablespoons of sugar intake per mile. I did a trial run to work and back, four miles each way, carrying sugar packets. These were messy and troublesome, but I managed to get my sugar in without any digestive difficulties.

I then tried to cook up some measured lumps in 1 tbsp doses. 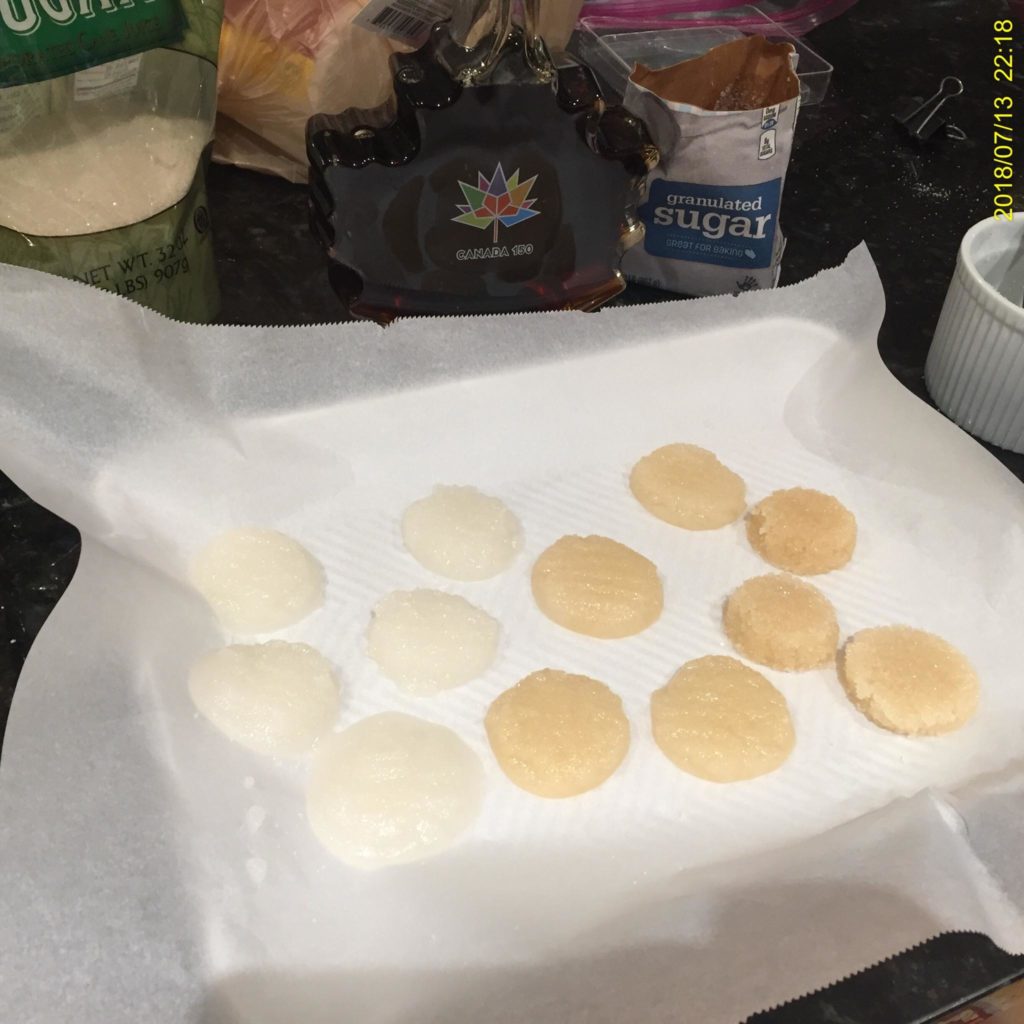 A bit of maple sugar provided some flavor and helped the lumps keep their shape, but a few hours running around in Great Falls Park left me with a Ziplock bag full of crumbly mess.

Finally I thought of ready-made sugar cubes as the best solution. A one-pound box of 198 cubes contains 453 grams; one tablespoon of sugar is 12.5 grams; the free energy released in oxidizing glucose by oxygen is ≈ -3000 kJ/mol … after spending too much time playing with numbers, I decided to eat six cubes every ten minutes and see what happens.

This July event was ideal for my purposes: three trail loops without much elevation change, offering two chances to resupply at a drop bag, and enough distance to flirt with the wall.

Things went well on the first loop, as I enjoyed zipping past the aid stations without stopping and getting to know the course. I kept an eye on my watch, and the ten minute cycle seemed to be a good balance between having to pull out my sugar bag too often and having to eat too many cubes at once. The dry cubes did not create much mess, and my hydration pack helped wash them down.

I felt good at eleven miles, reaching my drop bag. Somehow while swapping my empty fuel bag for a fresh supply I also abandoned my medical bag, with electrolyte tablets and Advil and Band-Aids. But I managed another loop, only getting somewhat tired of my tedious regimen.

At the second drop bag stop, I took out the frozen washcloth I had left there in the morning. This pick-me-up is a wonderful refreshment, and I also grabbed my medkit and Bag 3 of the increasingly unappetizing glucose cubes.

During Loop 3 I postponed or skipped some doses, feeling I had enough to get to the finish. A few miles before the end, a heavy downpour began, turning the trail into a rapid stream. This was an exhilarating way to wrap up a race, and I arrived at the end feeling clean and alert. I hung around to watch a few more finishers come in before heading home. 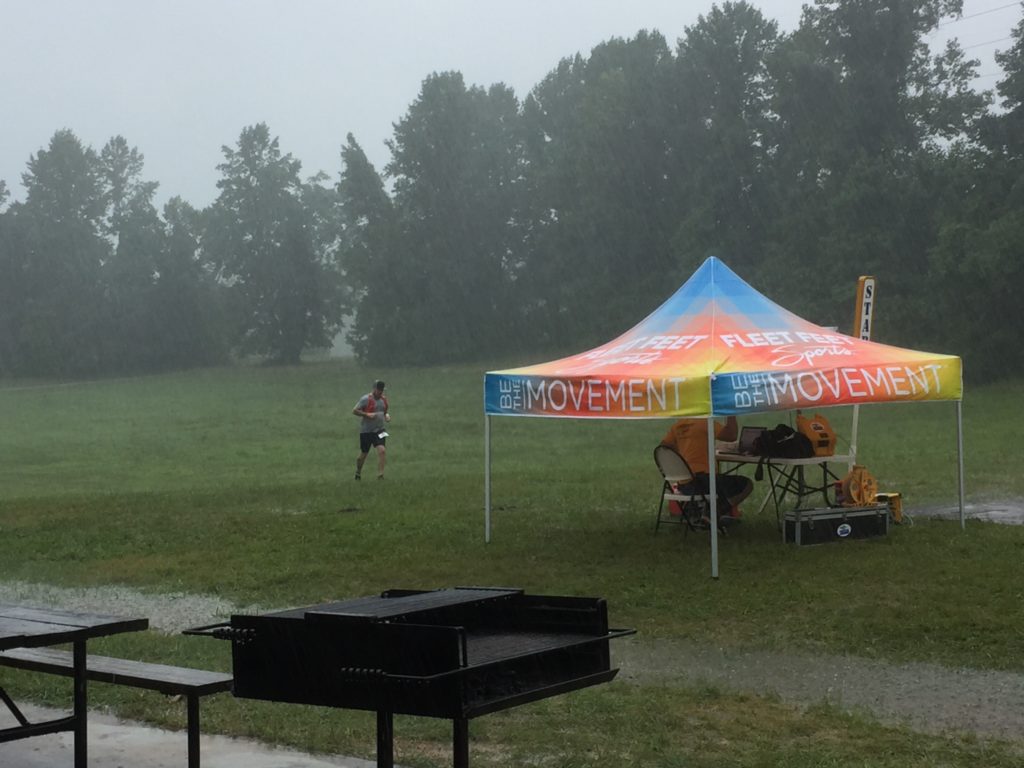 The biggest difference I noticed under the sugar program was missing the insatiable appetite that usually follows a long event for a few days. Rather than getting hungry again an hour after each meal, I was satisfied with a normal meal schedule. Apparently I had defeated one of the great charms of distance running: the license to gorge.

This marathon-distance course promised some energy burn with a vertical mile of elevation gain and a monstrous boulder field. I had admired this majestic challenge in satellite photos, and it was awe-inspiring in person. As we approached the base, the forest opened up to reveal a vast rockscape, dotted with brightly-clothed people creeping up to a distant ridge (which spectators were kind enough to inform us was halfway up). Most of the stones were well-anchored, but it still took both hands and both feet to maintain balance while scrambling along. I took a break from the sugar supplementation to focus on my footing, collecting a mountain-shaped, pocket-sized chunk of Tuscarora sandstone as a souvenir. 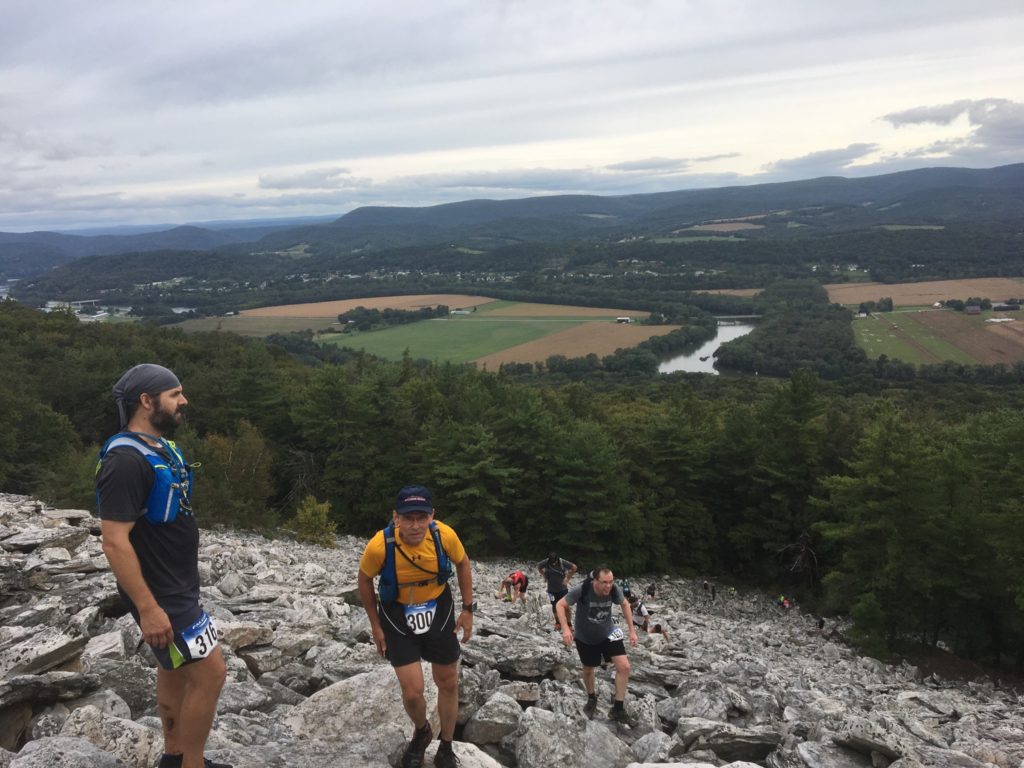 After enjoying the view from the top, the rest of the course seemed comparatively manageable. Whenever there was an especially silly pitch, and I could hear my heart pounding in my ears, I left a sugar cube near the top to encourage those following. I was pleased to finish in seven and a half hours, leaving time to enjoy the Pennsylvania scenery on the drive home. 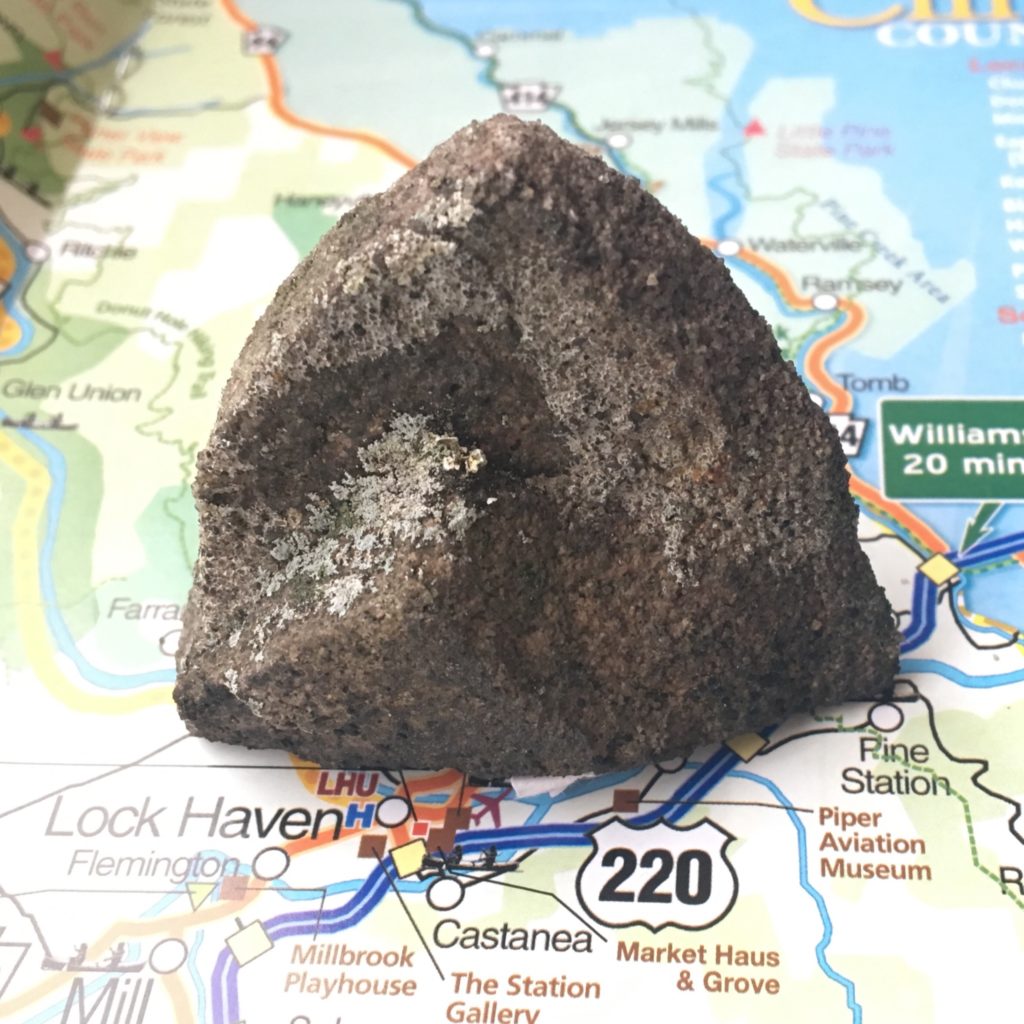