“Virginia Happy Trails!” I heard a woman call from behind me. In a blatant display of hubris I was wearing the BRR 50 t-shirt (over top of another shirt – it was cold at the higher elevations, and both snow and sleet made appearances), and she recognized the club name on the back. She said she had run BRR a couple times, but skipped it this year to run Hyner. Her friend caught up both of us and the first woman told her “This guy just ran Bull Run!”

We were some 11 miles in, and had just climbed to the top of SOB, the steepest section of the course. I was feeling pretty drained. Maybe it was the lack of training, maybe it was having run a 50 mile race the week before. The two ladies dropped me pretty quickly.

After summitting SOB the rest of the course is pretty easy, if your legs are still cooperating. I really wasn’t feeling it, though. I’d come in thinking I might go sub-four hours, but at this point I was resigned to just trying to beat my previous best time here (4:31:xx).

Before too long we reached the final downhill section. I was still proceeding at a slothlike shuffle. It was a little rocky here, but not really too technical – just enough so you needed some mental alertness to keep your feet on the trail. In the first quarter mile or so I was passed by several people. They’d call out “on your left!” and I’d have to move aside – there was not really enough room to pass safely on this section of trail.

Before too long I got sick of yielding the trail. “Screw it, let’s see what the legs have left,” and I just leaned forward and let the hill take me. I wasn’t passed again until we reached the bridge at the bottom; in fact I even managed to move up a couple places.

After the bridge there was only about half a mile or less of trail before coming out on the road. I slowed somewhat here but stayed above a walk, reeling in a couple more runners on the way. When I came out to the road my watch showed about 3:52:00 – I had eight minutes to run the last mile. At first I didn’t really think I could pull it off, but along the way I kept meeting up with other runners and encouraging them: “You still have time to break four if you push!”, and soon enough it occurred to me that that applied to me as well. With about half a mile to go I started to kick, but I knew I had delayed too long. My watch showed a pace of about 7:30/mile, which would have been enough had I started to kick as soon as I hit the road.

The course veers back onto trail just before the end and there’s a final hill leading up to the finish line. I was already over four hours, but I realized I might have a chance to beat my friend Shawn’s time from 2010 – he and I had both run it that year, and he finished in 4:00:36. I had started to walk that last hill, but having a new goal put life in my legs, and I surged up it, passing three or four runners who’d passed me on the road just minutes ago. I dusted some dude at the finish line, and crossed in 4:00:33.15, 265th out of 960 finishers of the 25k.

Of course this means I’ll have to go back – failing by 34 seconds will not stand, man!

The Boss did fantastic this year, cutting almost an hour and a half off of her previous time and finishing in 5:49:41. 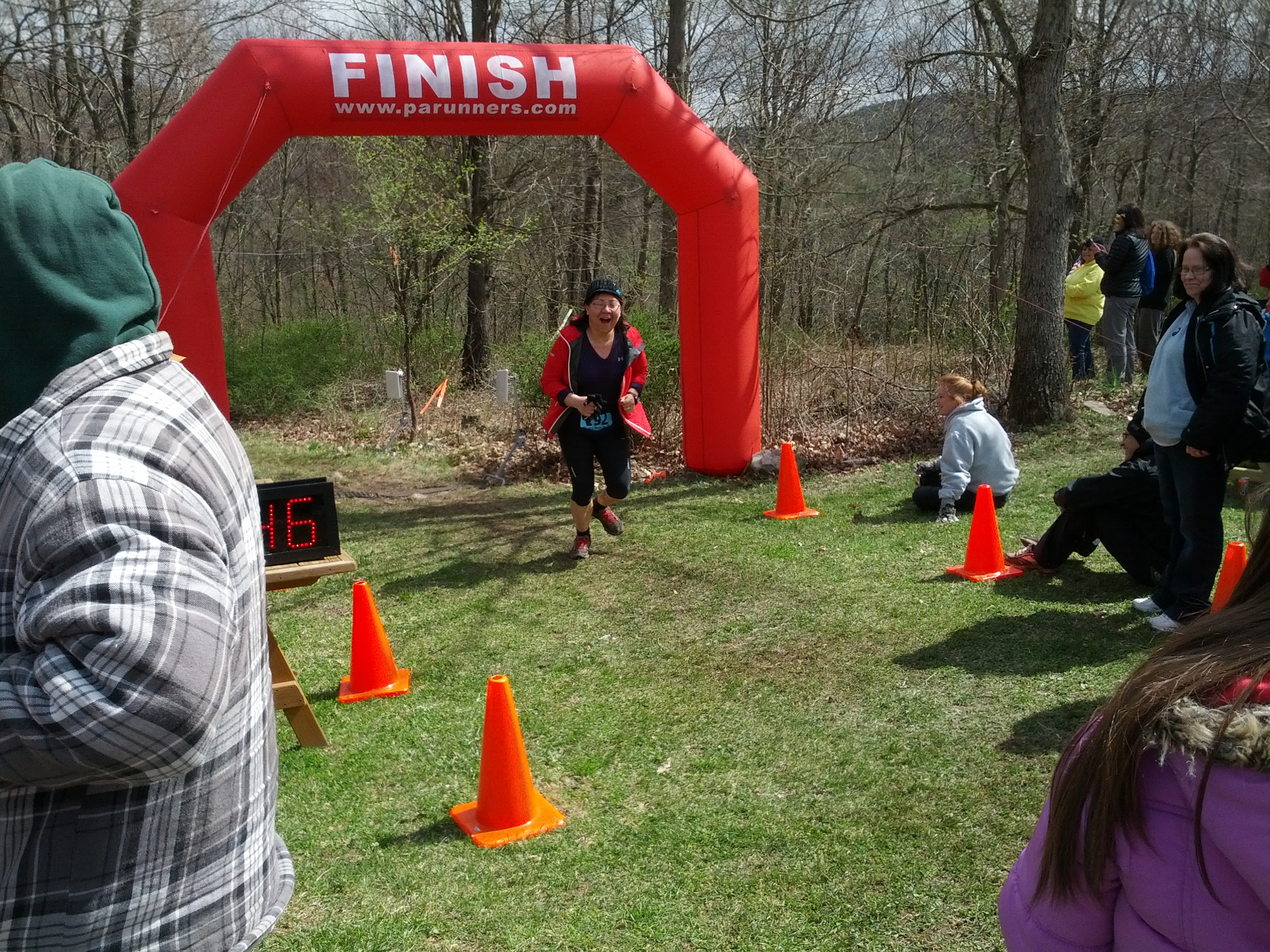 The Boss laughs at your puny course 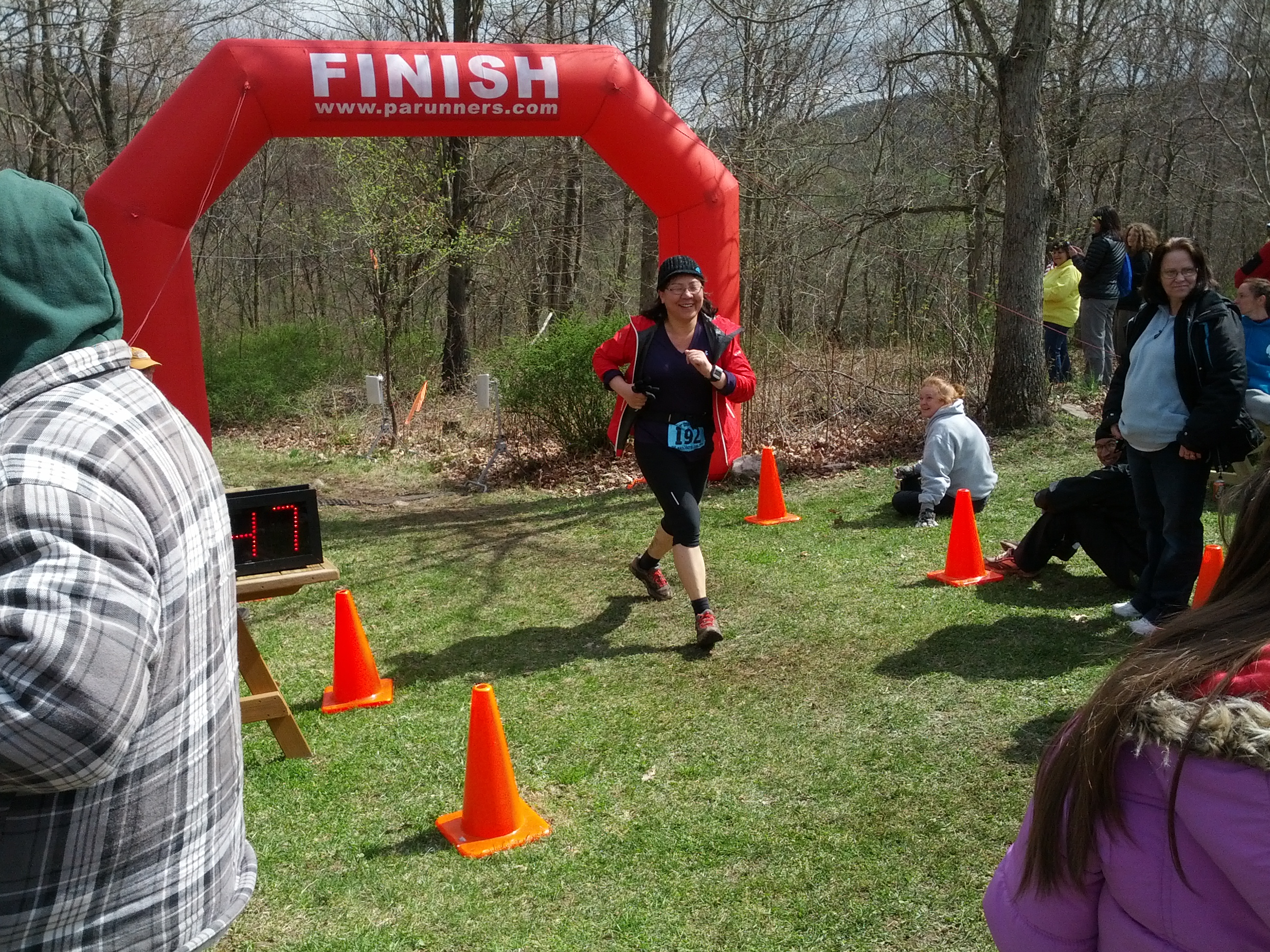