Friday evening I went to pick up my race packet at Hemlock. I hung around to wait for Steve, who would be staying with us Friday night. I figured I might as well check out the course condition while waiting – there had been pretty heavy rain earlier in the day.

I set off at an easy lope down to the river, where I turned right and headed along the last couple miles of the course. There was quite a bit of standing water, but nothing too boggy. And most of this water was gone by the time the actual race started.

As I was coming up the final hill to Hemlock I checked the time. It was about 7:24 PM, and I realized that this reconnaissance could very likely serve as a kind of “pre-enactment” of the actual race the next day. I knew that if I could finish at all it would be a mad, hobbling scramble to get in before the official time cutoff at 7:30. I had a vision of myself, 24 hours thence, in exactly the same place, except depleted and staggering and sore, trying to keep my failing legs moving another few tenths of a mile.

But on this day I had only run a couple miles. I power-hiked the rest of the hill and took off at a pretty good clip for the place where the finish line would soon be erected. I managed to cross that spot at 7:29 and some seconds. I’d need a much bigger cushion tomorrow to have any hope of an official finish.

Steve arrived and picked up his packet. We drove over to my house, watched The King of Masks on DVD, and headed to bed early.

First thing in the morning I went and got my checklist for the race. I’d never made a checklist before, and it made me feel powerful somehow – like a real runner instead of just a dilettante. I loaded up my hydration vest and drop bag with the things on my list, and I felt freakin’ invincible as The Boss drove us to the start line.

Waiting for the race to start I felt like just being a part of it was a dream accomplished. After my first ultramarathon, a 50K in Missouri last year, I briefly vowed I’d never run a race over marathon distance again. But even at the time I knew it was a lie. Ever since I learned of the BRR50‘s existence I knew I had to enter it.

We started. Steve and I ran together for four or five miles, then I turned to him and said “I’m going to see if I can move up a few places.” I was able to follow through on this, and I spent the next few minutes working my way out of the large pack we’d been running with and out into the open trail.

The next few hours were pure joy. The weather was perfect. I encountered several runners I’d never met, but whose names I’d come to know through my study of the local trail running scene. I met some pirates at the Wolf Run Shoals aid station. I was ahead of schedule coming into Fountainhead, and The Boss had not yet arrived. I left without waiting for her. The aid station at the entrance to the Do Loop had popsicles, and I left there feeling good. At this point I had run the first 30 miles of the course, as far as I’d ever run before.

I can identify the moment I knew I would finish this race. I was midway through the Do Loop, running strong and approaching the infamous Nash Rambler. Some wag had adorned it with balloons, a giant inflatable Hello Kitty, and a boombox that was shamelessly blaring a certain Springsteen tune on an infinite loop. It was clichéd and cheesy, but when I passed the scene in full stride just as The (other) Boss was growling “baby we were born to ruuuuuuun!” I couldn’t help but laugh with the pure joy of it. I knew then that I wouldn’t get to tell any epic tales of battling the time cutoffs; I was going to finish comfortably under the 13 hour limit. 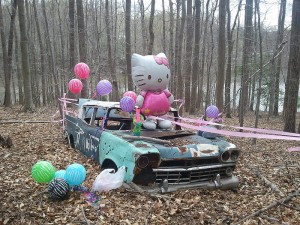 After the infamous Loop it was back to the aid station where I liberated another popsicle. I saw The Boss at Fountainhead, and she was a welcome sight. I begged some sunblock from the pirates at the Wolf Run Shoals aid station, and slathered it all over my head. When I handed it back to Alex P., he doubled over laughing and insisted on having me take a picture with the crew. How could I say no? 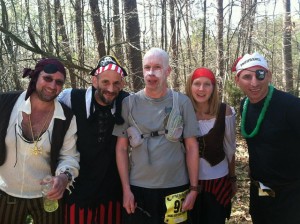 I reached the aid station at The Marina about nine and a half hours into the race. Five miles to the finish, and three and a half hours to complete it. A finish at my first 50 miler was basically a done deal. The Boss was there, encouraging me. I could visualize every step of the way back to Hemlock. I was content not to push too hard; I was almost two hours ahead of schedule. My legs were finally feeling the strain, and I couldn’t run more than a couple hundred steps at a time, but I couldn’t keep a huge, goofy grin from spreading across my face.

I don’t think there’s a picture of me approaching the finish, but I probably looked much like some of the other runners (except older, fatter, and balder). Running up that last stretch of road to cross the line and shake the RD’s hand was one of the most sublime experiences of my life.

I lived every minute of this day.