“I changed my mind,” The Boss said as she staggered into the living room, “I think I might want to do that again next year.”

“Omygod. No way am I ever doing that again. I’m done with running, maybe forever. Oh my God. Ow.”

“Meh, I always say the same thing after a long, punishing race. You might change your mind – after a while you’ll forget the pain and just remember how you felt at the finish line. Give it twenty hours or so…” 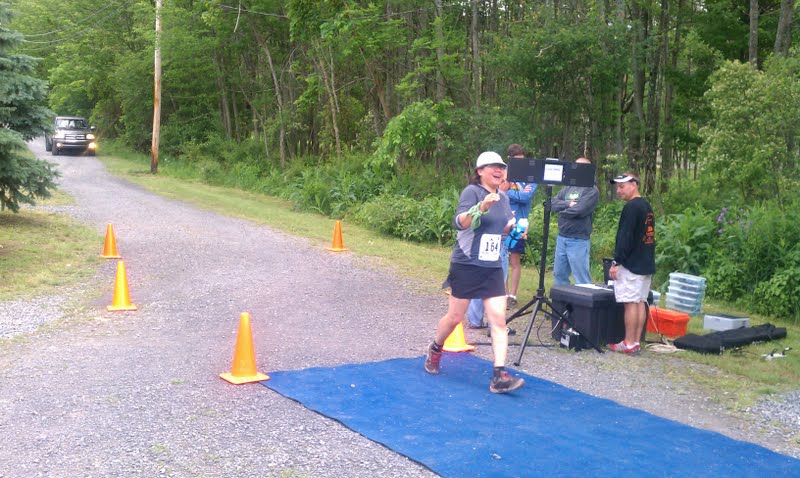 “You’re leaving before breakfast?” the desk clerk at the Carnegie Inn asked incredulously. Apparently we were missing out on something special. “We have a race to get to,” The Boss called over my shoulder, and I added “Afraid so”.

The start of the Rothrock Challenge was waiting for us some 12 miles down the road, and we had no time to fool around with brûléed oatmeal and asiago cheese omelets. I tossed the clerk the key, swiped the receipt out of her hand, and set out for the parking lot.

We arrived with plenty of time to spare, although the extra time wound up being consumed by trips back to the car for sunblock, bug spray, a change of shirt, and various other forgotten items. The lines for the portajohns were not bad, but The Boss still wound up getting stranded in one when the starting whistle blew. The race had chip timing, but only at the finish line, so she did lose a few seconds.

I knew my training was off. I had even briefly considered skipping the race altogether; my right hip had been bothering me since an ill-advised two-half-marathon weekend two weeks prior, and I had already lost months of quality running after breaking a wrist in early February. In the end I decided that 30k was short enough to get through on grit alone, even considering the difficulty of the course 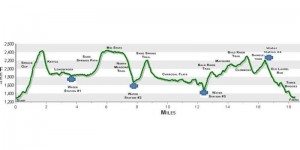 I had decided that five hours was a reasonable ambitious goal given my current level of fitness. I was hoping to take about an hour between each of the four aid stations, giving me an hour to stagger through the final ~2.5 miles. In an all-too-familiar pattern for me at distance events, this plan held together for more than half the race but fell apart in the end.

I set out at a pretty good clip (sub-8:00) along the initial section of road to the trail head. I knew there was a steep, mile-long hill at the start of the trail and I preferred to be the obstacle rather than the obstructed. This turned out to be about right – I was passed by a few ambitious runners, but mostly held my place. When we got to the summit there was a nice stretch of flat single-track, which was an absolute joy to run: the weather was near-perfect, and the trail was sublimely beautiful. It had rained hard the previous night and there were a few areas of mud and standing water, which I fastidiously ran around.

Of course, it wasn’t too long before I realized the futility of trying to keep my feet dry. There were bogs and mud pits throughout the middle 15k of the course that were unavoidable, and I was soon sloshing through them with abandon.

I hit the first aid station around mile 4 in just under an hour. Even with trudging up that mile of hill I was still under 15:00/M pace and feeling good. The second section was challenging as well, with lots of rocks starting to infest the trail, more climbing, plenty of mud, and some technical downhills. Still, I was through the second aid station and past mile 8 in under 2:00:00.

The third segment is more of a blur. I know I was still making OK time but I was starting to tire. Just before the third aid station there was a difficult climb down some rocks. It was dangerous enough that someone had installed ropes in several places for racers to cling to as they picked their way down. In one of these places I lost my footing and had to use the rope to right myself. This startled the lady below me, who was visibly (and audibly) nervous about the descent, and she scolded me for what she perceived as my carelessness.

At the bottom there was a large log, flattened along its top, bridging a sizable stream, followed quickly by AS3. I was just over 3 hours in at this point, and I figured the rocky descent had cost me at least 2 or 3 minutes. I was right on schedule.

But not for long. A few hundred yards past the aid station the path took a sharp left turn. This is where things started to get surreal. There was a young lady, not a racer, seated there at the turn. She had laid out a large pattern of small pink flowers around herself, with part of the pattern forming an arrow pointing the correct direction down the course. I paused briefly to admire the scene and then continued on to the rock scramble. 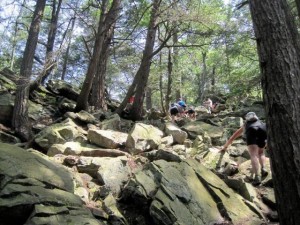 This was a hard slog. My legs were feeling the lack of training, and the climb was not easy. I found myself worrying about The Boss – how would she manage the rock slide and this crazy scramble? Should I head back to AS3 and wait for her so I could help her up the climb? I was about a third of the way up when I heard a series of shrill yelps and a separate set of harsh barks from far below and well off to my right. Had a dog been injured? Perhaps in a fight with another dog, or by falling off some rocky height? Should I go back down and check? I wasn’t confident I could even locate the source of the sounds. I decided to continue on.

A short time later I saw a dog with a scarf around its neck trotting up the rocks. It caught up to me, sniffed around for a bit, and continued up the scramble. I wasted a few moments in futile envy of its nimble, easy climbing. I don’t know if it was one of the dogs I’d heard.

When I got to the top of the rock climb I knew I was pretty much done. I didn’t have legs to run any more, and my feet were getting kind of blistery and sore. The Hoka Mafates I’d recently acquired had absorbed a lot of the impact, though. I think if the course had been drier my feet would have come through almost unharmed, and they felt fine the day after. My legs were a different story, however. From that point until AS4 I mostly walked in a zombie-like shuffle, although there were several nice, flat sections where I was able to run a couple hundred paces at a time before reverting to a reeling shamble.

After AS4 there was one final climb and then a long downhill stretch. I ran practically none of this. Then there was a long meandering flattish section over which I mostly walked, but occasionally busted out some air. I kept thinking the road was just ahead, but the course kept veering off just before exiting to pavement. Finally, I reached the road and broke into a hopeful, ragged jog. I saw a couple sitting on rock wall by the roadside with a dog, and I thought I heard the man explaining to someone in an aid vehicle that he had found the dog after it had been hit by a car. The dog looked not to be injured too bad, and I hoped it was the one I’d heard yelping earlier.

From the point where I left the trail it was no more than a half mile or so to the finish, but I regret to say I didn’t manage to run all of it. In my memory we’d run uphill all the way from the start to the trail head, but now I was heading up another big hill. If I’d known how close I was to the end I’d’ve probably been able to run it all, but I was demoralized by the unexpected and baffling upslope, and I wound up walking maybe a couple hundred yards or so.

When I recognized the turn to the finish I was able to break into a decent jog, and I crossed the finish line in 5:41:15.8, tossing salutes to the knots of charitably cheering spectators. The last 6.x miles had taken me very nearly as long as the first 12.

Now it remained only to scarf as many calories as possible and wait for The Boss. I did manage to totter back to the car and grab my phone in order to capture her finish. The post-race spread consisted of pizza and Subway and barbecue and baked beans and potato salad and cole slaw and chocolatey, peanut-buttery “recovery bars” and sodas and water and powerade, and I consumed near ’bout one of everything.

I was still somewhat worried about The Boss. She was even more undertrained than I was. Had she managed the rock slide and climb? Had she fallen and brained herself on some stony outcropping? Had she lost a shoe in a bog? Had her legs given out on the final uphill? I was tense and concerned, but I knew she’d conquered a similar course last year in worse weather.

I don’t mind admitting that my eyes were less than completely dry as I saw her coming down to the finish. I normally have to scold her for walking with the end in sight, but she ran it all the way in this time. She swapped her chip for a finisher’s medal, and a hearty embrace ensued. Her time was measured at 7:21:39.9, only some 5 minutes slower than her time at the 5k shorter Hyner View Trail Challenge last year, and ahead of 20 finishers (and, I assume, some number of DNFs).

They had run out of plates and most of the food. The Boss managed to get a paltry amount of barbecue on a bun, and a cup full of side dishes. It turns out that a generous runner had provided her with some kind of electrolyte concentrate when she’d had cramping issues in the latter part of the course. She introduced him and I shook his hand. We waited to see the finish of a woman we’d chatted with before the race. We weren’t sure when she’d be coming in, and we almost decided to leave, but finally The Boss sighted her rounding the turn to the finish and we cheered her in. We limped back to the car, changed our clothes and shoes, luxuriated in the glow of our achievement for a few moments…

…and The Boss and I set out through the Pennsylvania hills towards home.